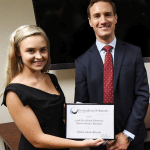 Everingham Solomons is proud to announce the successful bursar for 2018 is Claire Annis-Brown. Claire is an extremely well rounded student of McCarthy Catholic College having achieved excellent academic results in a range of subjects through her HSC.  She is both liked and admired by her teachers and peers alike.

Claire is an accomplished sportswoman, particularly in Hockey where she has captained Tamworth representative teams for a number of years. She has also been involved in a range of local charitable endeavours over a long period of time.

Claire is enrolled to study law at the University of Newcastle in 2019 and Everingham Solomons wishes Claire the very best in that endeavour.

As the successful bursar, Claire has received a monetary award to assist with her study and the invitation for clerkship at Everingham Solomons during University breaks.

Claire’s school, McCarthy Catholic College, has also received a donation from the firm.

Everingham Solomons is committed to the growth of the region and the success of its youth and has for many years offered a bursary to Year 12 students wishing to pursue university qualifications in law.

The bursary was named in honour of one of the firm’s founders, Sir Adrian Solomons. Sir Adrian completed his secondary education at Tamworth High School before commencing university studies in law in 1940 at the University of New England and later at Sydney University.  Sir Adrian returned to Tamworth after his admission as a legal practitioner in 1949 to become a respected solicitor and founding partner of Everingham Solomons.

Sir Adrian was knighted by Her Majesty Queen Elizabeth II at Buckingham Palace in 1982 for services to law and government having for many years been a member of the NSW Parliament and remained a consultant to the firm until 1989.

If you would like more information on the Law Bursary, please contact Everingham Solomons because, Helping You is Our Business.